You see your first daughter taking her first steps and luckily your camera in your hands. You get excited and what you have to do: you stand, point, and click! You captured a unique moment forever – if you do not lose the photo. It’s very simple, is not it? How can we capture that wonderful second in our lives in just one photograph. But how a camera works for process image?

From the primitive equipment used in early nineteenth-century France to the sophisticated digital electronic systems of today, photography equipment has come a long way to become an inseparable ally of any departure, excursion or special moment of our lifetime.

Historically, it should be noted that the first cameras were of the most physical and chemical technology , without any type of electronic system. Although with the evolution of technology we have reached such a point that with a small device we can take pictures of Great quality and that later we can represent without losing this characteristic.

Since 1990 a slow but inevitable technological replacement has been developing in the field of photography. Since film rolls and the long and tedious development process is being replaced by a much more practical and clean technology.

This new system of photography is characterized by its convenient mode of use, , excellent image quality, its small size and of course the practicality it offers when viewing, sharing and manipulating the photographs taken.

If what you are thinking is to abandon your old 35 mm. In order to enjoy all the benefits that the use of digital cameras will bring you, throughout this article we will tell you the secrets of this new technology, exposing everything you need to know about this exciting subject.

Answering the question of how a camera works is not as difficult as it sounds.

Basics of how a camera works

The basic process of how a camera works, is not so different regardless of whether it is the latest camera or any other type of camera that came to market. Light travels through the lens and strikes some kind of light sensitive surface inside the camera body makes image. But the type of surface that process light and the method by which the camera uses that surface to create a photograph separates digital cameras from other types of cameras.

The first thing to know is that digital cameras are composed of several elements that in tune give us the ability to take photos and save them as a bitmap in digital form. The process of transforming light into electrical energy is the goal of all of them.

These elements are the lens (or system of lenses) through which light passes in the form of energy that gives off the entire environment photographed, the screen or viewfinder where we can preview the image we are going to capture, the famous flash for the environment to detach More energy and the images look good, a diaphragm that controls the focal aperture, a trigger that has a very curious effect (appreciable in the video that we leave below), a sensor processor and a memory to store the images.

Each type of camera makes use of some similar components, such as a lens and a shutter. When the shutter is closed, the light cannot traverse the lens to hit the light sensitive material that is inside the camera. The similarities end here, as a digital camera makes use of numerous components that are unique in digital photography. And they are the following:

The image sensor is made up of millions of tiny silicon semiconductors, which pick up photons (elements that make up light, electricity). At higher light intensity, more electric charge will exist.

In short, the image sensor is a chip that houses millions and millions of photosensitive cells ordered by squares or squares. Each point of the image is formed depending on the amount of light the cell receives.

The most important difference between these technologies is the way computers obtain images.

In a film camera, to reproduce the image we have captured, the light entering through the lens causes a chemical reaction on a film that is composed of several overlapping layers impregnated with light sensitive chemicals.

In the case of modern digital cameras, the principle is the same, except that the light that passes the lens does not sensitize any kind of film, but an electronic element called a sensor. The phenomenon produced is no longer chemical, but electronic.

When the trigger is triggered, the lens allows the light reflected by the object to enter, this light sensitizes the image pickup sensor, which decomposes these beams into red, green and blue colors.

Subsequently, these signals are converted into analog electrical charges by the sensor, which will be transferred to the electronics of the device. 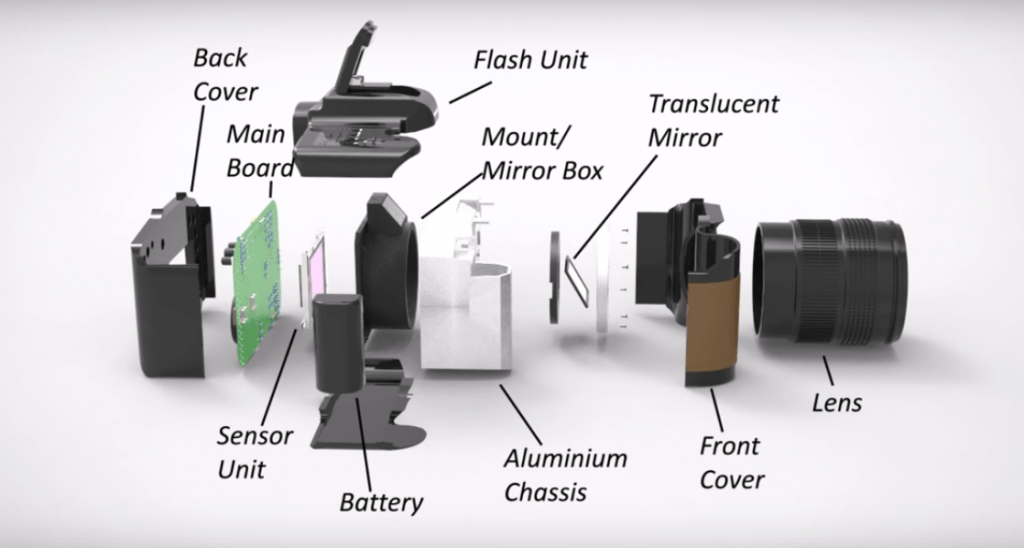 Digital cameras carry a circuit board that groups all the computer chips used by the camera to record the data. The circuitry on the card carries the data from the image sensor and other chips to the storage on the memory card. An analog camera does not need a circuit board or digital converter.

This item is used to make changes to the camera settings, as well as to compose the picture and review it after it is taken. In contrast, the analogue counterpart does not need a screen, as it depends on a viewer to frame the scene and buttons and selectors to switch between settings. Although some digital cameras still use viewers to compose the scene, they offer the screen as a second option.

How a digital camera works: step by step

No matter if you are using a digital camera with water resistance or a super advanced DSR. The process of recording the digital image and storing the data on a memory card is the same. Digital cameras have a number of elements that give them the ability to take pictures, just as they did their film ancestors. The step-by-step process by which a digital camera takes a picture is:

Measuring light: Press the shutter button to open it, allowing light to pass through the lens and hit the image sensor. This lens may be of the fixed or interchangeable type. The individual pixels in the image sensor measure the intensity of light at millions of different points in the image sensor, which creates an accurate measurement.

Focusing the light: Since the light of the scene travels through the lens, it must be focused precisely on the image sensor. The different glass elements in the lens will rotate to provide sharper focus. When the light is not focused well is when blurry scenes come out. Digital cameras can use an autofocus where the camera adjusts the glass elements automatically. Or focus manually, where the photographer rotates a ring to manually adjust the elements. The viewfinder by which you can frame the object to be portrayed. In the most modern equipment this function is provided by an LCD.

Converting Light: Each pixel converts light that has been measured into electrons. A pixel that measures a brighter light will contain more electrons, resulting in a larger accumulated charge. Then an ADC (analog-to-digital converter) chip converts the light signal into each pixel into a digital value.

Storing the data: With the scene light already converted into a digital value. The camera can move the data just like any computer chip does, moving binary bits through the circuitry on the circuit board. When the bits reach the memory card, the camera uses the firmware to write the data into memory.

Since a digital camera stores images as digital bits of data, it is easy to share those pictures with other devices and others. Once the picture has been stored as digital bits, you can treat it as any computer file.

As we see, the process of capturing images from digital cameras is in theory simple, but there are other elements to take into account for the total compression of the technology and terminology used in the field of digital photography.

No matter if you have one of the best cameras on the market or just the one you’ve had in the drawer for years. Understanding how a digital camera works makes it easier to achieve what you want to do with your photographs.