Australian researchers have already developed a form of superglue-like substance, the Revolutionary Superglue, which medical experts can squirt on wounds (including internal wounds) to seal them within a few seconds and potentially change treatments in war zones and car crash sites.

The working process of the glue is similar to that of regular bathroom sealants that builders use for tiling. However, the sealant is made of natural elastic proteins. After the medical practitioner has squirted it on a wound site, they just need to strike it with light. After that, the superglue sets in a few seconds.

The gel can replace sutures and traditional staples and even treat an internal wound that is hard to reach. The natural elastic properties make it suitable for wounds in tissues that expand and relax continually such as lungs, hearts and arteries.

Professor Tony Weiss from the University of Sydney talks to Ross about a revolutionary super glue that could be used to treat wounds in car crashes and war zones.

Benefits of the revolutionary superglue in treating wounds

People have used superglue for many decades to fix broken things. When injured, you should seek immediate medical attention. Medical practitioners have also worked to make Emergency Departments pleasant. One way of making the emergency rooms pleasant involves use of revolutionary superglue to treat wounds in place of stitches. Here is why they are recommending the glue:

If you are a patient reading this, you have to read the last point for a second time. Why? Most parents who take their children to emergency departments for stitches realise that the children become fearful immediately they enter the room. They might need to keep the children still or the medical practitioner is forced to use sedating medication.

Most parents do not want their children to be sedated and doctors do not to want to do that. Revolutionary superglue will eliminate needles from the medical procedure, minimise the scaring and ensure that the child is out of the emergency department within a very short time.

Use of revolutionary superglue is particularly cosmetically helpful when used on the face. The skin on your face is not as tight as that on other body parts. Therefore, the superglue will seal wounds without increasing the risks of unsightly scarring face at the end. Sutures work better in the areas surrounding the mouth, hands and feet because the areas move constantly.

Surgeons have already perfected an effective technique known as the Three-Layer Wound Closure Technique. The technique involves two layers of absorbable stitch layers – hidden under the skin – and superglue on top to form the final closure. In the past, surgeons shied away from the technique but today, they believe that it is safe and most of their patients love it. A patient can go home on the same day she had breast augmentation and shower on the following morning. They can also get back to their workstation if they want.

The advancement is likely to revolutionise the industry considering that breast augmentation is the biggest surgical procedure among plastic surgery patients. In the year 2016, for example, 7769 Britons went for the surgery.

Women will be back to work within the second day

Now, with the effective surgical glue, wounds cannot leak out any blood. Minimum dressings are needed and putting on a bra to head back to work within the second day is very easy. In addition to the physical benefits, the glue is a boost to the patient’s mental wellbeing.

Surgeons use absorbable sutures, which have to remain dry for at least one week after the patient has left hospital, to close wounds. That means that a patient cannot have a shower or bath for several days – and the worst part is that they will have to change their daily life routine. Even more, the glue closes wounds more efficiently and faster.

Doctors have already stated that with revolutionary superglue, women will undergo breast augmentation surgeries and get back to their work desks within the following day. Surgeons argue that surgical superglue used in place of sutures will slash the post-op recovery time and allow the patients to proceed with their daily duties. The superglue facilitate faster closure of wounds and even though NHS advises women to take a few weeks break from their jobs to allow recovery, the method is safe and most patients have already loved it.

The primary reason behind the recommended recovery time after a breast enhancement surgery is that the post-surgical wounds have to remain dry. Private surgeons advise their patients to take around 14 days breaks off their daily job and within those days, they should not bathe. However, the NHS believes that the recovery time can exceed six weeks. The glue helps towards almost immediate recovery and a patient can bathe on the day following the surgical operation.

What makes the glue?

The injectable superglue is based on naturally occurring proteins known as Tropoelastin. Practitioners apply it directly on wounds and activate it using UV light to form the complete seal. The glue will eliminate the need of staples and stitches in accident sites. And due to its elastic nature, the glue can work perfectly in the common shape-changing organs such as lungs and heart. After the glue gets into contact with the tissue surfaces, it will solidify immediately to form gel-like phase.

Even though further research is needed, the inventors are optimistic about the findings and the future of the revolutionary superglue. The probable applications are stronger. 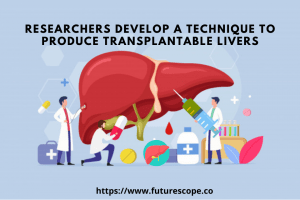 A Technique To Produce Transplantable Human Livers In The Laboratory